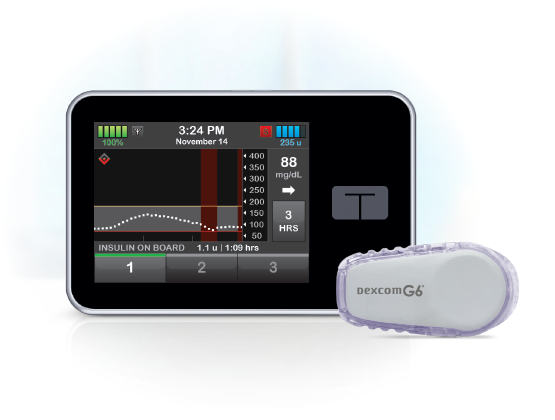 However, in the systems currently being tested, people still need to introduce carb content (or insulin dose) of their meals.

A recently published study investigated the impact of Tandem’s closed-loop delivery system (t: slim X2 with Control-IQ), which was just approved in the United States, on blood sugar management in people living with type 1 diabetes.

The main goal was to see if the use of the closed-loop system improves the time spent with blood sugars between 4.0 and 10.0 mmol / L, which is the glycemic target for the majority of people living with diabetes.

With this system, the percentage of time in range went from 61% at the beginning of the study to 71% (+ 10%) after 6 months. This represents an additional 2 and a half hours per day during which the blood sugar was within target!

For the group that did not have access to the closed-loop, the percentage of time in the target remained unchanged at 59%.

After using the closed-loop for 6 months, the improvement in blood sugars seems general with:

The positive effects on blood sugars observed in the closed-loop group were not observed in the other group. The absence of automated basal insulin suspension during hypoglycemia (a function now available on other pump models) may explain why the amount of hypoglycemias remained unchanged in this group.

When will a closed-loop system be in Quebec?

Now approved in Canada, the t-slim X2 insulin pump with Basal-IQ precedes the introduction of the closed loop with Control-IQ. The Basal-IQ technology has the advantage of suspending basal insulin automatically to prevent hypoglycemia when connected to Dexcom CGM. Current users of the Tandem pump will not need to change pump to get the Basal-IQ, they will be able to download the update directly to their pump.

Currently, the only system similar to the Tandem Control-IQ and available in Quebec is that of the company Medtronic (MiniMed 670G). At least 4 other companies have also presented comparable systems including Diabeloop, Insulet-Omnipod, Beta Bionics and Eli Lilly.  Eli Lilly will use a software developed in Montreal. However, none have announced short-term marketing initiatives in Canada, but things are changing very fast in terms of technology. A simplification of the use is expected in the coming years with simplified or automated meal boluses, for example.

The automated insulin delivery is probably one of the major hopes for the treatment of type 1 diabetes because it will simplify the management of blood sugars, make it more effective (less hyperglycemia) and safer (less hypoglycemia) ).

The BETTER research project aims to understand the important issues for people living with type 1 diabetes and maximize the benefits of new therapies and technologies .

Do you live with type 1 diabetes?

Help us advance research, technologies and treatments by registering.